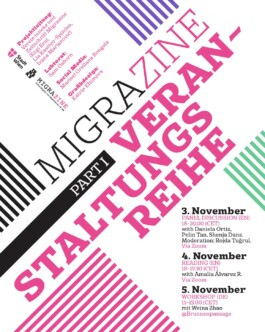 During the last few years, increased by the awareness around the Covid-19 pandemic, we have seen how the term safety is a highly ideologized concept, constructed to protect the structure of a minoritarian group of privileged people. Thus, the resources for dealing with vulnerability, which builds the basis of security policies, are not equally distributed in society. At the same time, marginalized people who migrate to the Global North face daily insecurity, although this reality is barely addressed in the mainstream media.

This podium discussion organized by Migrazine will address global security policies as well as local approaches from communities and self-organized collectives that oppose a hegemonic narrative of security.

Migrazine - Online Magazine by Migrant Women for All - is a multilingual online magazine edited and conceptualized in Vienna, Austria. Female authors from all around the world are invited to collaborate twice a year in Migrazines Website. Since 2009, Migrazine aims to make critical migrant voices more audible in the media public sphere and to stand up against the stereotypical portrayal of migrants. Migrazine has been fighting, above all, for the participation and articulation of migrants as protagonists and actors in the media.

WHO ENJOYS THE STATE OF FEELING SAFE?
OUR GUESTS:

Daniela Ortiz (Perú/Barcelona) aims - through her work - to generate visual narratives where the concepts of nationality, racialization, social class, and gender are critically understood in order to analyze colonial, capitalist, and patriarchal power. Her recent artistic projects and research address the European migration control system, its link to colonialism, and the legal mechanisms created by European institutions to be able to exercise violence against migrant and racialized populations.

Pelin Tan (1974, Germany) based in Mardin, Turkey. She is the 6th recipient of Keith Haring Art&Activism. Currently, professor at the faculty of fine arts - Batman University, Senior researcher of the Center for Arts, Design, and Social Research and researcher at the faculty of architecture Thessaly University. She is a sociologist and art historian researching, writing on the labor conditions, commons, and conflict territories. She is a member of the Artikisler Collective.

Shenja Vasanthi Kumari Danz (she/they) is part of the BigSibling collective and is active in various anti-racist and queerfeminist contexts. She writes, learns, and discusses on the topic of racial profiling, with a particular focus on intersectional analyses of
racist police violence.

MODERATION: Rojda Tuğrul is an interdisciplinary artist and researcher based in Vienna, whose practice focuses on the notion of identity in relation to space. Her current research project seeks to analyse the effects of war on ecological and cultural heritage within the socio-political framework of Kurdish territories. Her work is rooted in the ongoing conflict between the Turkish State and the PKK (Kurdistan Workers’ Party), analyzing its consequential influence on ecological habitats. Rojda holds an MSc in Veterinary Studies and is in the process of writing her dissertation as a PhD candidate in the Practice Program at the Academy of Fine Arts in Vienna.

ABOUT
We will read two stories from the comic book by Amalia Álvarez "Cinco historias sobre prostituYentes (Five Stories About ProstituteRs)”. The book tells the stories of persons that define themselves as prostitutes. In their stories, they describe those that they call “los prostituyentes”. The narration is based on real persons that live or have lived in Sweden. The book is in English-Spanish and Swedish.

Amalia Alvarez R. is a comic creator from the Lickan Antai nation in the Atacama Desert, currently living in Sweden. Her comics focus mainly on antiracism, migration, representativity, and identity, in the genres of social realism and satire. She has published two award-winning comic books “Five stories of undocumented women” and “Five stories about prostituters” along with several anthologies, illustration in research projects, fanzines,
posters etc. Apart from this she holds workshops on comics and representativity at folk high schools, universities, NGOs and in elementary- and high schools. She has participated in several exhibitions and is a member of the Anti-racist Academy of Sweden, ARA, where she e.g., has made the illustrations for the Anti-racist dictionary.  amaliaalvarez.com